Warren Buffett has sold completely out of IBM (at a loss)

In November 2011, when Berkshire Hathaway announced they invested in IBM, I wrote that it was a big mistake he was making.

Well, on May the 4th, CNBC reported that Warren Buffett says Berkshire Hathaway has sold completely out of IBM:

Buffett says Berkshire has ended a difficult chapter in its investment in IBM while ramping up its stake in Apple.

Well, this is something that took a very long while to happen, much longer than I thought, but it finally did.

Here's IBM's stock price since Nov 2011, and Berkshire has made a sizeable loss on that, or as Buffett puts it: Berkshire has ended a difficult chapter in its investment in IBM.

I can't believe the last post I made was already three months old. It's been 3 "crazierest" months as would come them as it seems like the world economies are imploding while the market participants are as euphoric as ever.

Anyway, here's a quick update on the EUR side:

Disclosure: I have a long EUR position at about 1.12 EUR/USD and another one at about 1.06 EUR/USD

A Rally on the EUR is about to start

The Euro has been on a one-way downtrend since May 2014 where it was trading at 1.39xx against the USD all the way down to 1.12xx which it reached as I'm typing this post. 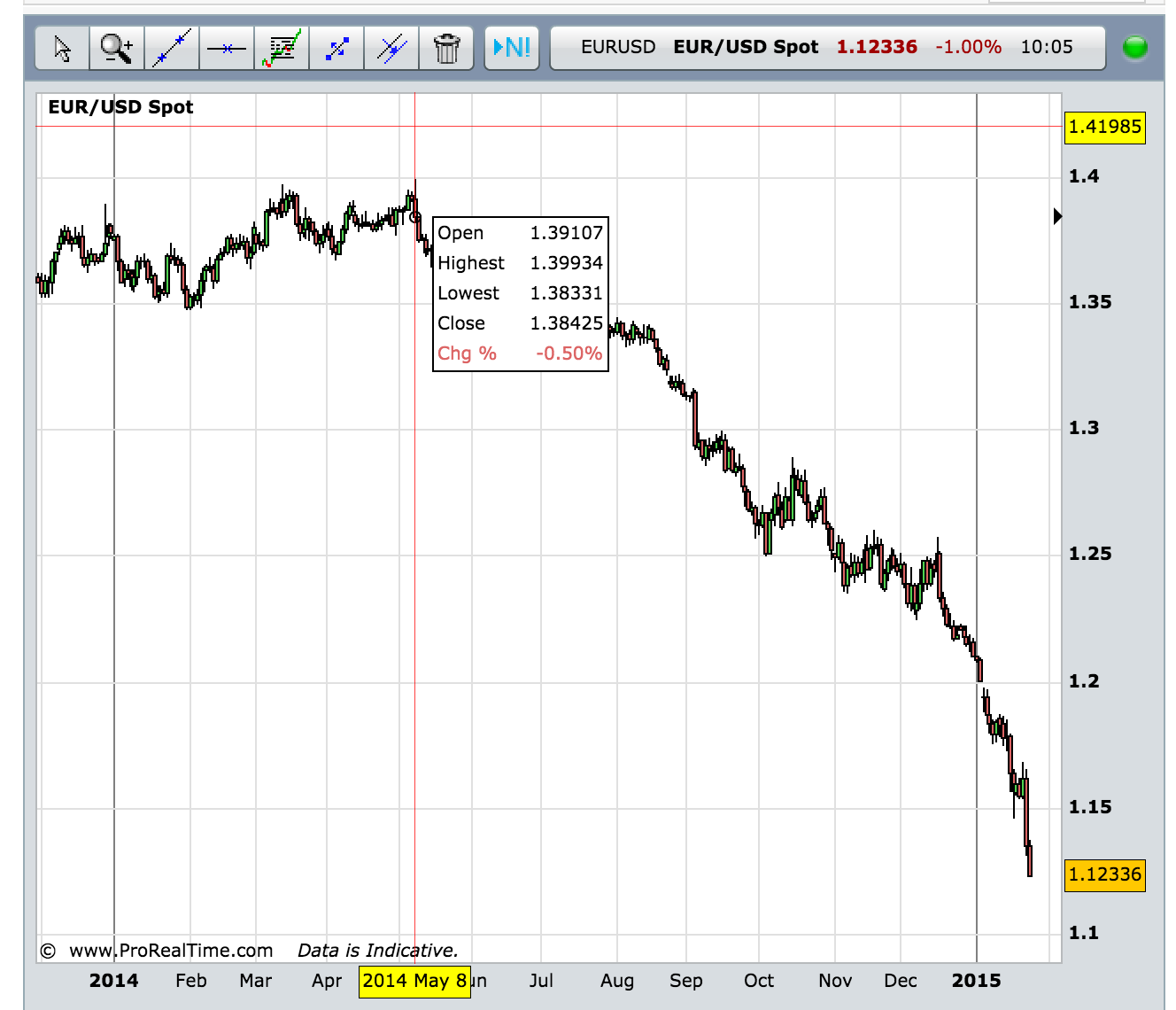 Sentiment has been very negative for a while now:

"Everybody" hates the Euro, while on the contrary, everybody loves the US dollar, and that trend has been going for a number of weeks now, so I'm expecting it to reverse very soon.

The biggest catalyst is probably going to be the fact that the ECB had purposefully leaked the number 50 billion of their money printing, currency debasing project, in order to "positively surprise" the market a couple of days later by announcing 60 billion euros being printed every month.

Now, this "positive surprise" is priced in. Speculators are massively short, as shown on the COT report below. 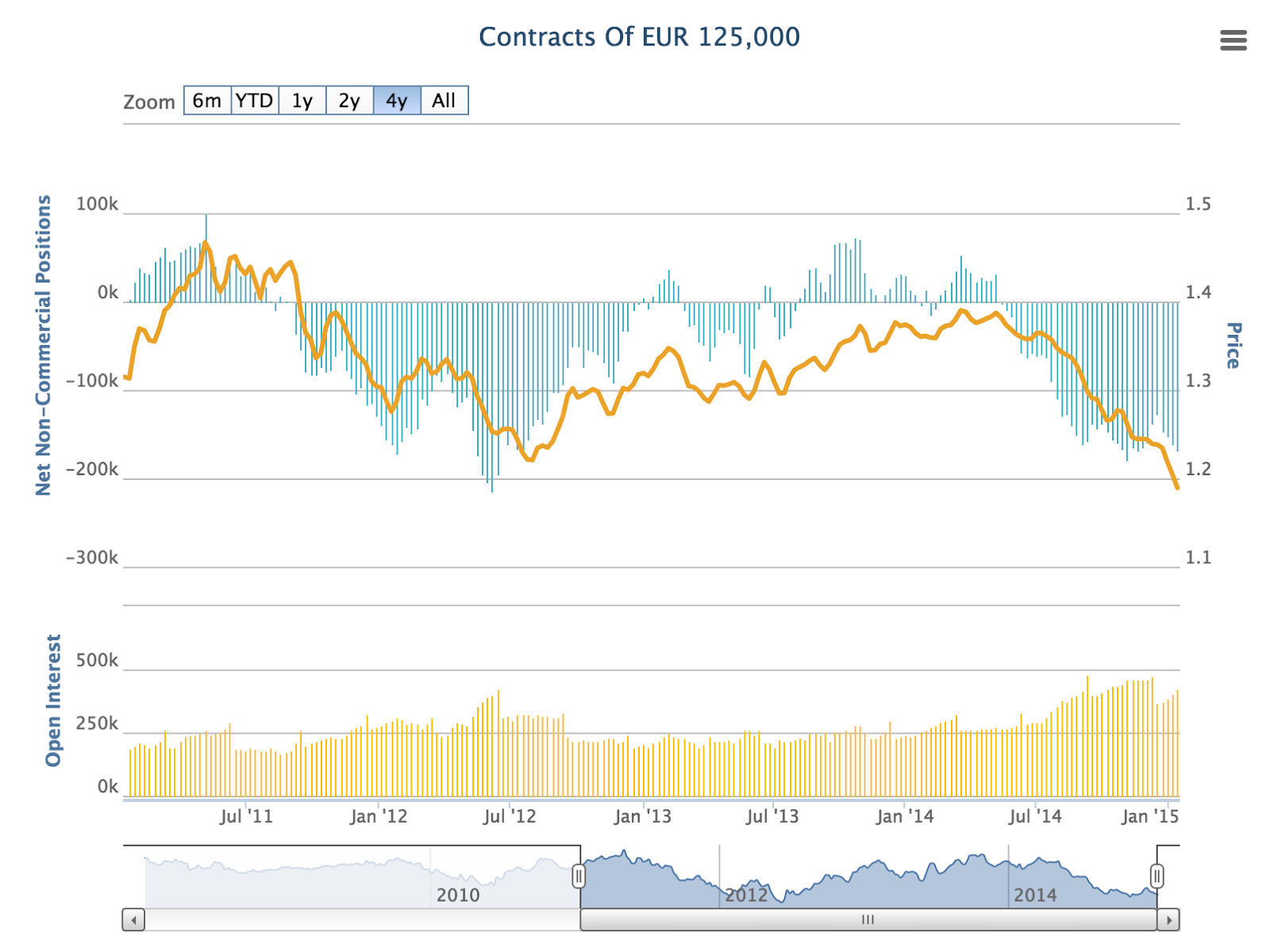 It makes sense for contrarians to bet against the crowd at this level and expect a bounce.
As usual, I will make an update to this post when I open the position.

[Update: I purchased EURUSD options on Friday when the EURUSD was trading at 1.132x. This should give a limited downside risk, specifically given that I believe the EUR bottomed just after I posted this blog, and in the case of a rally, I would have a very good leverage.]
By pej at 10:35 No comments:

Swiss Franc Surges 30% Against the Euro In 13 Minutes

This is not a typo, the EURCHF has collapse 30% in a matter of minutes, moves unseen in European FX markets: 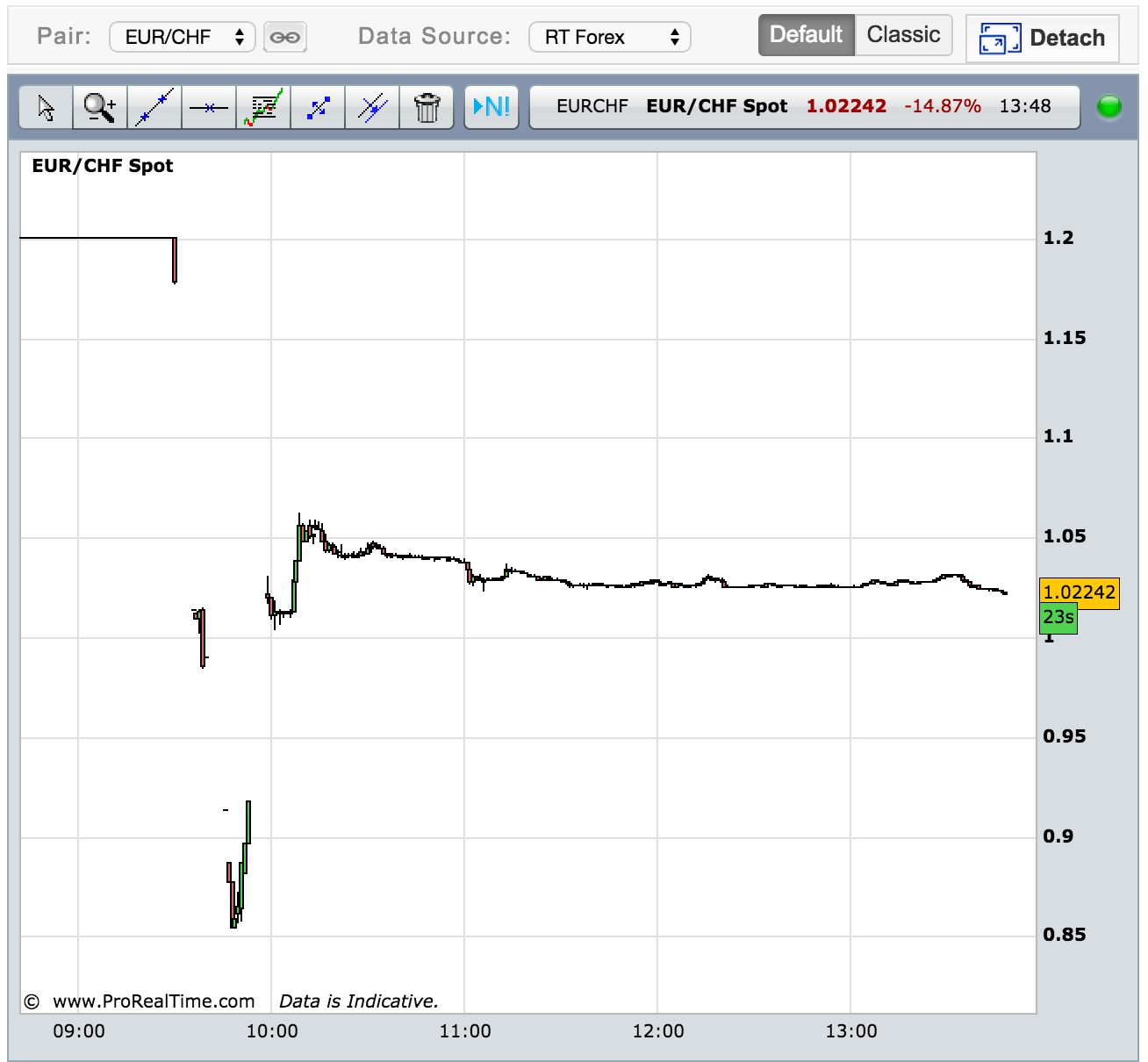 All the way from 1.20 down to 0.86, the fall of the EUR following the SNB decision to halt their peg. The peg had been put in place back in September 2011, which had caused a 10% move in the currency (Swiss Franc Collapses as Central Bank Announces Pseudo-Peg)

Central banks are once again creating chaos, after failing to achieve their unrealistic control of markets. It will be interesting to see which players of the markets will get wiped out by such a move, as casualties there will be after such a move.

It will be interesting for the SNB to announce what they intend to do with the dozens and dozens of billions of Euros it's been accumulating of the last 3 years.

Crude Oil has been dropping like a rock over the past few weeks, which leads the total decline of CL1 (the front trading WTI contract) to more than 45% since it was trading at above $100 dollars at its peak in June to $58 today. 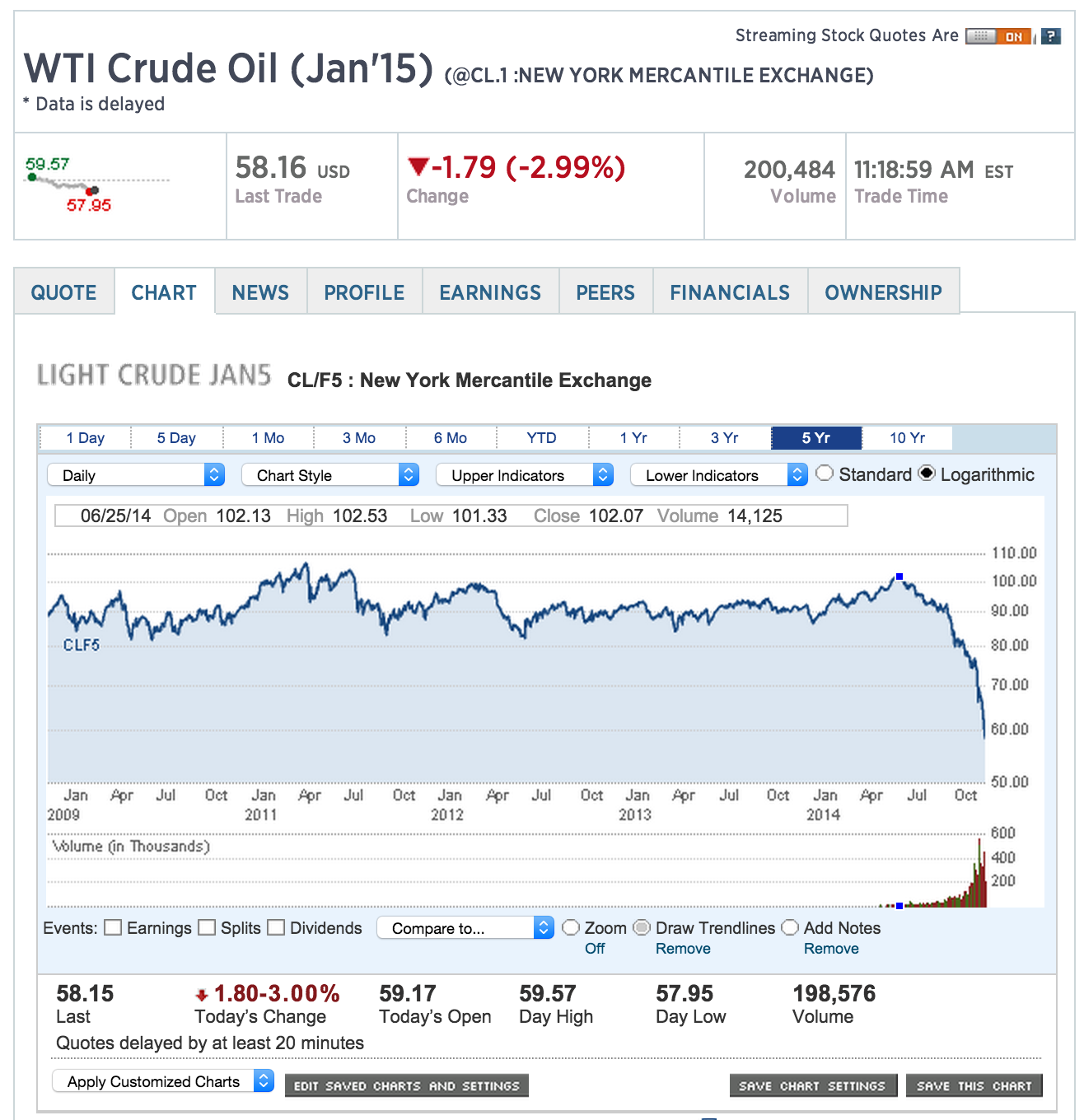 USO — the largest oil tracking ETF — is now trading well under $22 (currently trading at $21.87, while typing this post), making a historical low, below the 2009 crash level when WTI bottomed and bounced off at about $32 (The reason is the roll cost of commodities contracts, and show that buy and hold in futures contract is very inefficient). 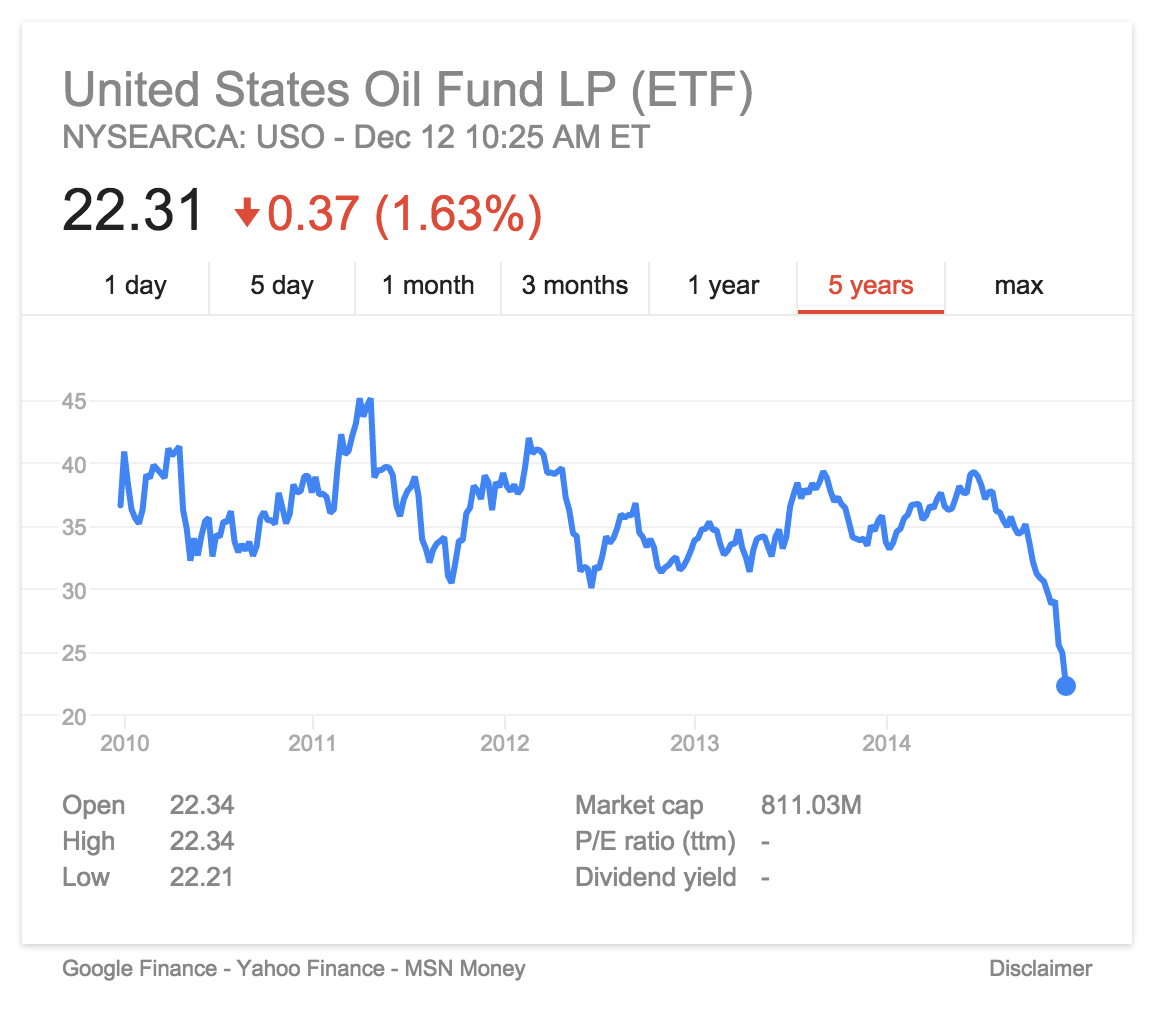 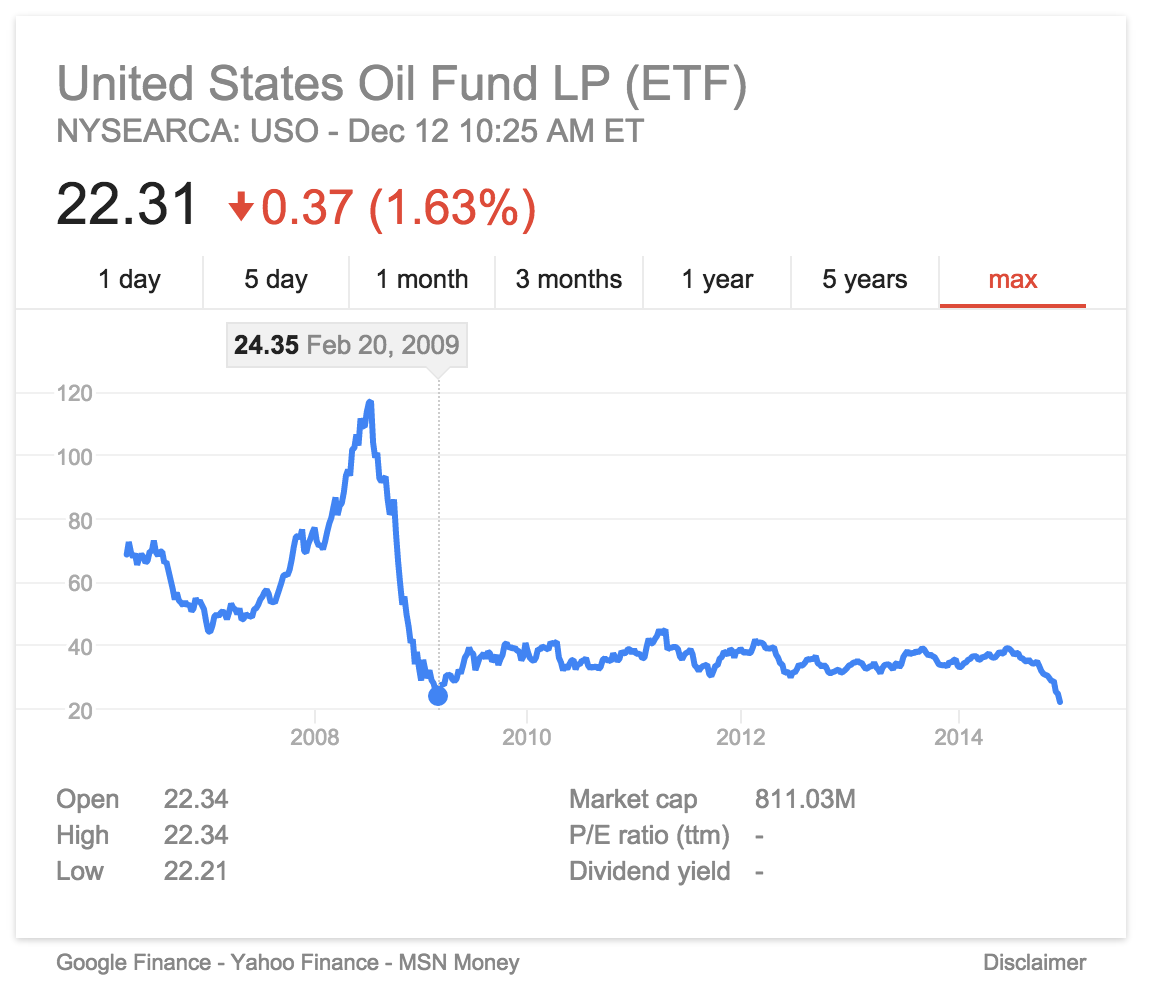 Everybody bets on oil dropping, the newsfeed is only negative, and even at one of my clients, a tech shop, the PA knows that it will drop until at least $50 until mid Jan.

“I can see no news that would give any reason to buy oil at the moment,” Christopher Bellew, senior broker at Jefferies International Ltd. in London, said by e-mail.

Another quote from another Bloomberg report:


“It’s a new era,” said Carl Larry, a former trader who is now a Houston-based director of oil and natural gas at Frost & Sullivan

Known for his conviction that oil prices will rise in the long term and that U.S. shale drilling is overhyped, Hall — [pej: aka Oil Trading ‘God’] — still sees reasons for an oil rally -- eventually. First he sees crude prices falling further to as low as $50 a barrel before recovering in the first half of next year, according to his Dec. 1 letter to investors.

The sentence "This Time is Different" is usually known as the most expensive sentence in the history of investing: it is always used as a exuberant reaction trying to rationalize unsustainable and impossible trends into the future.

Additionally, Barron's is a first class candidate for the Magazine Cover Indicator.

While I haven't read the full report, amazingly, Barron's states on the cover they know that this the "most dangerous words on Wall Street", but we still dare to say it. 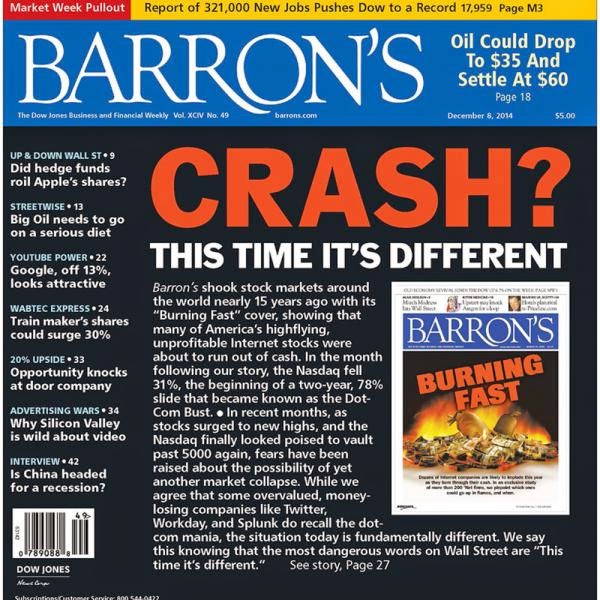 The magazine is dated the 8th of December (yesterday), which, unsurprisingly to contrarian investors, marked a big down day. Today seem to be another down day too.

So the conclusion from this post should be that we have either already hit the top of the multi-year bubble, or are very very close to the crest — probably a few weeks maximum.

I keep my ammo for a shorting early Jan, but I might change my mind before that, in which case, I'll mention it on the blog.
By pej at 17:40 No comments:


In 2010, when I wrote a post titled: Massive inflationary booms always end in tears induced by the resulting deflationary bust — Here's the case of Ukraine. I had concluded that:


Prices will have to decline by 82% from the 2007 top to reach the 2002 levels, after a 562% boom. As corrections are always overdone, I wouldn't be surprised to see a 90% decline. Remember: if you buy an asset after a 80% decline, but that the actual peak to trough is 90%, you loose 50% on your investment.
Ukraine is just another story of inflationary boom from a corrupt political class that allowed banks to push credit so much without any of the limits that a Free Market would impose. The resulting deflationary bust is going to be extremely hard, specially since the global economy is also falling into the abyss. There isn't going to be any exogenous support possible...

The housing market has been in a downward spiral since the global financial crisis, making Kiev a buyers’ market. “Since 2008, prices have fallen twice,” said Igor Darmogray, a lawyer in the Kiev office of the Berlin firm Werner & Partners. “Two years ago, the prices were simply unimaginable, they were extremely high. The apartments which cost $1 million, now it’s difficult to sell them at $500,000.”


According to the data found on this page, the second leg of the price collapse has started as is even more violent that the first one, with prices crashing by about 30% just in Q2 and Q3, in nominal terms: 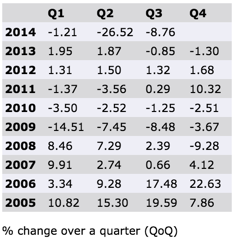 Now, add to the fact that the local currency, the Hryvnia has also crashed by about 50% against the USD in the past 12 months alone, and you'll get a picture of the devastation that has happened in the property prices of Ukraine.

With the very little details I have been able to find, we can try to do some basic calculations, starting from a price of 100 in 2008, the price would have been about 50 in 2012. They dropped another 30 odd percents in 2014 after staying relatively flat in 2013. So we're now at 35. Finally, accounting for a 50% drop in the currency against the USD, it means that in USD terms, the prices is now about 17. This is an 83% drop in property prices in a bout 6 years, and there's still room for further drops, since Q4 2014 should also mark a decline given the situation in Ukraine. I wouldn't buy yet, but prices should now start looking attractive.

Of course, some will argue that with civil war in Ukraine, it's expected for the prices to have fallen so much and that nobody could have forecast that. This would be wrong. It would be easy to argue but difficult to convince that war is a consequence of economic depression and not the other way around. Should Ukraine be a country with a booming economy, chances are none of the clashes and wars would have started in the first place.

This is my thesis, and this is why it is possible to forecast the price drop without knowing which event will trigger the crash.
By pej at 13:22 No comments:

Reality Lenses in your Inbox

pej
Follow the markets and the global economy from a Libertarian and Austrian School Economics point of view. You can reach me at spam dot recycler at GMAIL dot com.